Walking in Mui’z Street is like going through the history of Islamic Egypt. The Street abounds with a profusion of grandiose and magnificent Islamic monuments. This Cairo district is a totally unique architectural ensemble.

Muizz street is the largest open museum of Islamic monuments in the world, as the street includes various monuments: mosques, gates, avenues, palaces, established over 1040 years .. It also includes the most important textile museum that contains 250 rare pieces.

Al Moez Street is the main axis of historical Cairo, it summarizes the story of this city from its founding until now, in which all aspects of Islamic civilization were embodied, starting from the Fatimid era, through the Ayyubid era, then the era of the Mamelukes, then Circassian, then Ottoman, and extends for a length of 1200 Meters from Bab al-Futuh, passing through the Al-Nahhasin area, Khan Al-Khalili, Al-Sagha area until it is crossed by Jawhar Street, “The Musical Leader”. Thousands of Egyptians and tourists, as a shrine Archaeological, tourist and commercial market.

ElMui’z Li Din Allah was once the main street in Cairo. Over the centuries, many buildings have been built on this street which today represents the largest open-air museum of Islamic monuments and the Middle Ages of the Egyptian capital.

El Mui’z begins at Bab Zuweila, the only remaining door of the southern walls of the time Fatimid of Cairo. Beside Bab Zuweila there is the mosque of Sultan Mu’ayyad, who was built in 1415. You can climb the minaret of the mosque from where you have an excellent view of Islamic Cairo from above.

We then arrive at Wakala Al Ghuri , a 17th century caravanserai. After Bab Zuweila, go straight along Mui’z Street and cross the Wakala of Al Ghuri, which is a large market mainly specialized in fabric products.

Further north, you will find the Al Aqmar Mosque on the right. This mosque is also called the “gray mosque” because of the color of its walls.

Then we pass the amazing house Beyt El Suhaymi, a very good example of the way a wealthy family used to live in Old Islamic Cairo.

If you continue walking on Al Mui’z the street, you will arrive at the Al Hakim Mosque Allah Be’amr, the third Fatimid Caliph.

The beautiful walk to Al Mui’z The Din Allah ends with the walls and doors of the north from the city: Bab El Naser, Gate of Victory, and Bab El Futuh, Gate of Conquest.

Life on this street, as well as throughout the city, is going on actively: all Egyptians are in a hurry somewhere, the smell of spices and oriental dishes pour from the windows. 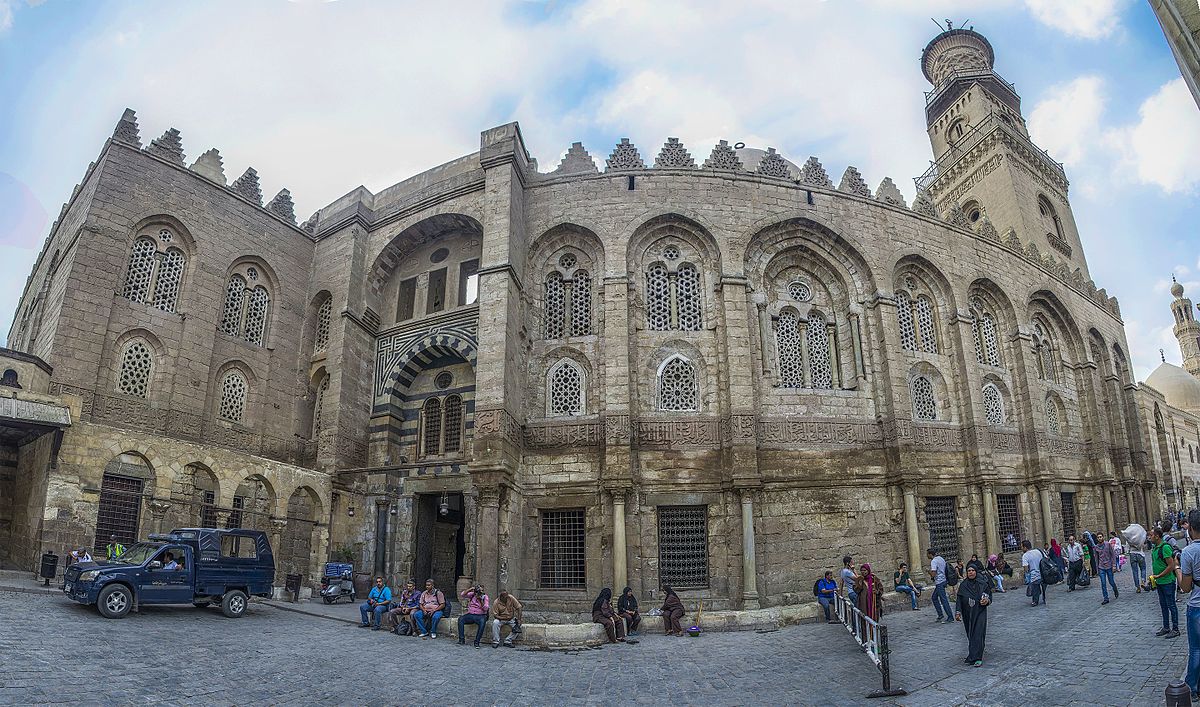 Al-Muiz itself is a very long street: it connects the northern gate of Bab-en-Nasr and Bab-al-Futuh with the south gate of Bab-Zuweil. The gates in the north of the city were built in 1087 by prince Bard El Gamal. Passing along the street from south to north, tourists can see various mosques that were previously considered the main ones in Cairo. Among these magnificent buildings are:

The mosque of Al-Akmar is small, but very beautiful – the real little treasure of old Cairo. It is located north of the eastern palace and was built in 1125.

Among the religious buildings located on Al-Muiz, it is worth to highlight the Al-Muayyad Mosque or the Red Mosque. This is one of the oldest buildings in Cairo, a sample of Mamluk architecture.

This mosque was built by order of the Sultan of the Mamluks by the name of Al-Muayyad Saif ad-Din in 1421, it took about 6 years to create. First they gathered to build a burial complex and a place for Friday prayers. Also in this building they planned to teach Sharia law relating to the schools of Hanafi, Shafi, Maliki and Hanbali. The project was fully implemented, the creators even built two additional classes for tafsir and hadith, as well as two classes in which they recited the Koran and conducted legal research. 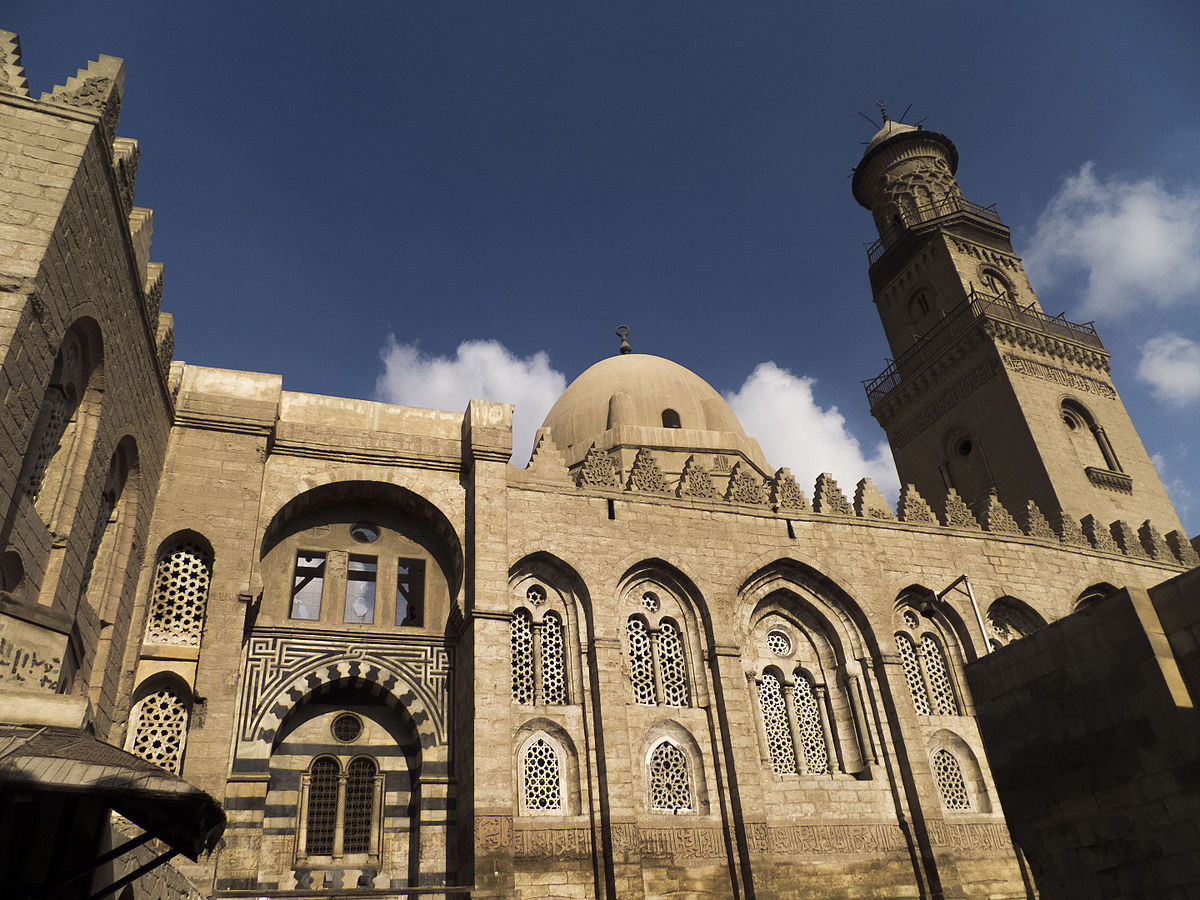 Another religious building is the Sultan Qalaun mosque. In addition to the mosque itself, this large-scale architectural ensemble includes a mausoleum, a madrasa, and a large maristan (hospital). All of the above was built under Sultan Kalaun from 1284 to 1285. The foundation of the complex was the ruins of the Fatimid Palace.

Sultan Kalaun is an extraordinary person. He began his career as a purchased slave, trained in the art of war. He made a brilliant career in the army, later seizing power

Al-Muiz Street also has Sultan Al-Ashraf Barsbay Madrasah – a real treasure trove of Islamic architecture masterpieces. Not far from it is the mosque of the Sultan Hakim (crazy Hakim), built in 1013. Remarkable is the fact that this building lay in ruins for a long time, it was completely restored only in the 20th century.