When you book with an account, you will be able to track your payment status, track the confirmation and you can also rate the tour after you finished the tour.
Sign Up
984

The long-delayed museum will finally open its doors to visitors in the last quarter of 2020. This mega museum in Giza will showcase Tutankhamun’s burial treasures for the first time, all at the same place, including 2,000 artefacts that have never been made public before. A visit to the Grand Egyptian museum is a highlight of your Egypt tour.

The museum is sited on 50 hectares (120 acres) of land approximately two kilometers from the Giza pyramids and is part of a new master plan for the plateau.

The building of the museum has a unique beauty. although it will not rival the beauty of the Giza pyramids but it looks like foldings in the desert sand. The Facade of the museum is geometrical in shape with alabaster stone. The msueum is designed to line up with the Great pyramid of Kfufu and Menkaure.

The museum building is shaped like a chamfered triangle and while the front of the building has a translucent stone wall, it is the atrium inside that you will marvel at when you arrive.

The museum will house about 100,000 artifacts spanning a history of 7000 years of Egyptian history. With latest technology in its halls.

The goal of the new Grand Egyptian Museum is to ensure that people like yourself get to see and experience the artifacts of Egypt from the last seven thousand years.  The plan is to have at least fifty thousand artifacts within this museum, and approximately five thousand of them will have belonged to King Tutankhamen.  Most of those five thousand items were in King Tut’s tomb and many of them have never been displayed before.

This museum is planning on opening later this year and about one-third of the museum’s space will be filled with King Tut’s possessions.  Many of the artifacts that will be going on display in this exhibit have needed to be restored back to their original glory, as some were falling apart.  Thanks to the work of many talented people, his jewelry will be restrung, his sandals will be beautiful, and every other piece will look like it did many years ago.  Even the king’s bed is being restored by wood specialists so that it looks just as it did when he used it when he was alive.

The mummy of King Tut will also be moved to this museum to be displayed within the exhibit, along with two other smaller mummies who are believed to be his stillborn children.

Instead of missing many of these artifacts because they were in storage or traveling to numerous museums to see what was on display at each one, you will be able to simply visit the new Grand Egyptian Museum to see every piece of fantastic Egyptian history.

One of the artifacts that has been recently transported to the museum is the thirty-foot-high granite statue of King Ramses II.  The statue is more than three thousand years old and weighs about eighty-three tons.  The statue was placed in a cage that was constructed specifically for the transport, and it was surrounded by a mounted military guard and a marching band for the journey.  Once it arrived at the new Grand Egyptian Museum, it was placed inside the atrium where it will greet you every time you walk through the front doors.

While you are visiting this museum, you will be able to wander through exhibition galleries and watch a 3D movie within the cinema.  It may be the ancillary buildings, restaurants, and shops that pique your interest the most after you have completed your exploration of history.

You may want to consider taking a guided tour of this museum, as there is so much that you may not know about the artifacts that you are seeing.  A guide will be able to share the history of each one, while also sharing other informative stories about Egyptian times.

Since the new Grand Egyptian Museum has numerous floors filled with exhibits, you are going to want to plan on staying there for at least a half of a day, if not longer.  While there is an admission fee, you will also find that there are extra fees that you can pay depending on what you want to do.  For example, a trip to the mummy room will cost you more, as will taking your own camera in to take pictures of all the artifacts.

Virtual reality has also been incorporated into this new museum space, so every visitor will be able to incorporate the latest in technology during their visit.  There is nothing better than feeling like you are being transported back in time as you are experiencing seeing these items for the first time.

Pick up from your hotel to start your tour to the Grand Egyptian museum. Start your tour by seeing the Ramses II statue that will welcome you at the entrance of the museum. Roam the different halls and see the collection of TUT Ankh Amun tomb . Have a free time to roam and enjoy the pyramids views. 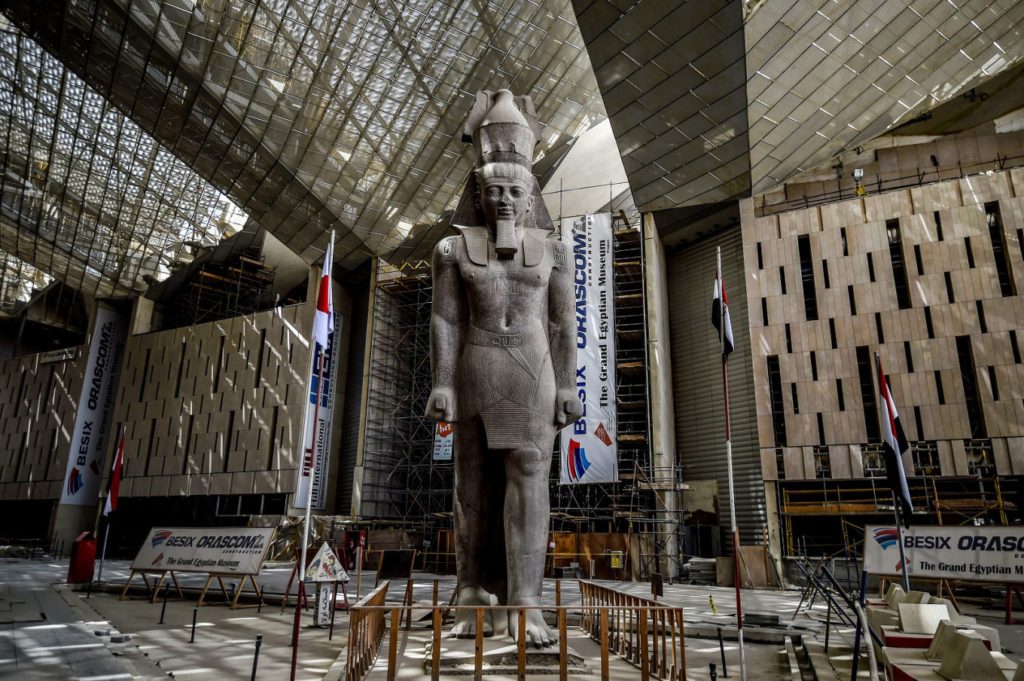 Grand Egyptian Museum Exclusive Tour – Get there before anyone else!

2 hours
Availability : To be Scheduled
Grand Egyptian Museum Giza
0
From$1,050