The Grand Egyptian Museum is located west of Cairo near the Pyramids of Giza, and this site was chosen to be this huge project, a testament to the greatness of Egypt in the past, present and future. Hengan Peng won the museum’s architectural design competition. Atelier Buchner won the museum’s exhibition. The construction works were won by Orascom Construction Industries’ (OCI) alliance with Basic.

The museum was designed to be the largest museum of antiquities in the world, with an area of ​​117 acres of 500,000 meters, and it will contain more than 100,000 artifacts from the Pharaonic, Greek and Roman eras. More than 5 million visitors are expected annually. The museum will include a number of commercial and recreational service buildings, a center for ancient materials science and restoration, and a museum garden in which the trees that the ancient Egyptian knew would be planted.

The project, which costs $ 550 million, is implemented in three main phases. During 2010, the second phase of the project was opened, which includes a restoration center that includes a number of testing and analysis laboratories such as microbiology and scanning electron microscopy, in addition to maintenance and restoration laboratories such as the mummy maintenance lab and a laboratory. Timber, Stone Factory, Ceramic, Glass and Metal Factory.

The last stage – which is currently being implemented – will include the creation of museum galleries, the Museum of Learners, the Convention and Cinema Center, the Archaeological Library, and the Children’s Museum, and the fun will open The first of them is to display the holdings of King Tutankhamun, so that the final opening of the project will take place in November 2022. The visitor’s path to the museum begins with seeing the obelisk square, in which he displays the first obelisk hanging in the world and sees in front of it the majestic facade of the museum, “The Pyramids Wall” with a width of 600 meters and a height of 45 meters. It includes many halls, most notably the King Tutankhamun Hall, which includes the king’s treasures combined for the first time, a library of rare books and antique stores. And the conference building that includes a 3D hall, a cultural center, a main restaurant square, a commercial walkway and shops. As for the external squares, it includes the Sun Boat Museum, a group of restaurants and many gardens.

The Great is located a few miles west of Cairo, near the Pyramids of Giza. It is being built as the world’s largest museum of archeology, to accommodate 5 million visitors annually. In addition to the commercial and recreational services buildings, the restoration center and the museum park, in which he will plant trees that were known to the ancient Egyptian. Egypt has launched a campaign to finance the project, which is estimated to cost about $ 550 million, in which Japan will contribute $ 300 million in a soft loan, but the first attempt to raise the money needed to build this giant monument was represented in the new exhibition of Egyptian antiquities at the Art Museum in Los Angeles, USA American, under the slogan “Tutankhamun and the Pharaonic Golden Age”. The museum will house over 100,000 artifacts from the Pharaonic, Greek and Roman eras, which will give a huge boost to the tourism sector in Egypt.

Because the museum is located in front of the Pyramids of Giza, the facade is designed in the form of triangles, each range divided into smaller triangles in a symbolic frame of the pyramids, according to a mathematical theory of a Polish scientist talking about the endless division of the shape of the triangle.

The museum buildings are located on an area of ​​100 thousand square meters, including 45 thousand meters for the museum display. The remaining area includes a library specializing in Egyptology, a conference center, a research center, restoration laboratories, a three-dimensional cinema, and places dedicated to serving visitors such as restaurants, and cloning shops Gifts, parking.

It is located on an area of ​​32 thousand meters, it is located approximately 10 meters below the ground level, and a tunnel has been established between the museum’s restoration center through which the relics can be safely transported with a length of approximately 300 meters.
The restoration center includes 19 laboratories in which the various types of monuments are restored and restored to their natural form, including:
Ceramic, Glass and Metal Factory: for the restoration of utensils and statues made of inorganic materials.

All instructions will be placed in the museum in three languages: Arabic, English and hieroglyphs.

It is planned that the area between the museum and the pyramids will be designated as a tourist walkway, by removing the archery club and all places that obstruct the walkway, as well as the construction of an overpass bridge over the Fayoum road, which will be implemented during the last stage of the museum’s establishment. The walkway will be used to transport tourists from the museum’s visitors to the Al-Ahram region, either by “kindness” cars or on foot.

It is planned to establish 20 shops and 8 restaurants in the investment area inside the museum campus, in addition to a hotel with a capacity of 30 rooms away from the covered museum part and the monuments.

tThe cost of building the museum is estimated at $ 550 million, of which 100 million is self-financing from the Egyptian Ministry of Antiquities, and the rest is $ 300 million in a soft loan from the Japanese (JICA) organization, in addition to $ 150 million in donations and local and international contributions. The project is being built in three main phases, which are expected to be completed by 2022.

It is the stage that included designs, technical, engineering and construction drawings, and the determination of the exact cost of the project. The foundation project of President Mohamed Hosni Mubarak was laid in February 2002, and in an international press conference, the international architectural competition for the design of the Grand Egyptian Museum was announced to be the largest museum of Egyptian antiquities in the world next to the Pyramids of Giza, and the international open architectural competition was organized under the auspices of UNESCO and provides architects and consultants from 83 countries with architectural conceptions and projects totaling 1557 projects. In July 2003, the awards of the architectural competition were distributed to the first winners, and the total number of awards reached 750 thousand dollars. Fourteen consulting firms from five different countries participated in the winning design. The study lasted 3 years, at a cost of $ 2 million, which was written in 8 volumes.

Stage one: It is the pre-primary stage during the period from November 23, 2003 to May 23, 2004 and included engineering and technical studies to prepare and research all elements and components necessary for preparing the primary design in all engineering disciplines.
Stage 2: It is the stage that lasted from August 15, 2004 to June 30, 2005 and included preparing engineering drawings for the final primary stage in all engineering disciplines, and during that period construction and construction work began during that stage in May 2005.
Stage 3: It is the stage of detailed design that lasted from April 15, 2006 to April 26, 2007 and included a detailed study of all items and details of the museum and holding the required quality tests on materials and design in addition to the systems expected to be applied.
stage 4 : The stage that lasted from August 15, 2007 until September 15, 2008, during which the design team completed the preparation of an integrated design that combines all disciplines.

Building and construction work started in May 2005 in parallel with the completion of the first phase which involved design work. The second phase included the construction of an archaeological restoration center, two power plants, a fire station, a security building, and archaeological stores. The cost of that stage is about 240 million pounds, equivalent to 43 million dollars, which was fully funded by the Antiquities Fund of the Supreme Council of Antiquities. The electric power plant contained central air conditioning and environmental control machines to supply the building with the restoration center with energy. It is also used as an alternative station for the main museum building in an emergency. As for the fire extinguishing center, it was equipped with fire-fighting devices that are managed by the Civil Defense Administration to serve the museum as well as the area surrounding the museum.

It includes building museum galleries, the Learners Museum, the Convention and Cinema Center, an archaeological library, and the Children’s Museum. This is the stage where work is currently underway, as the first stage opens in May 2018 with the display of Tutankhamun’s holdings, with the final opening of the project to take place in November 2022

Transferring the statue of Ramesses II
On August 25, 2006, the statue of Ramses II was moved from its old location in Cairo’s Ramses Square to be placed in its new location at the entrance to the Grand Egyptian Museum, which weighs 83 tons.

Transfer the effects of Luxor
In March 2016, the preparations for transferring 778 artifacts from Luxor Governorate to the Grand Egyptian Museum were completed, amid extensive security and security assurances, as well as using distinct protection and packaging methods, of course, to international rules. The artifacts belong to different eras of the ancient Egyptian civilization, although most of them belong to the era of the modern state, among them is a large statue of King Amenhotep III and the god Horus of pink granite weighing about 4 tons, which will be displayed on the grand staircase of the museum in addition to a number of pottery pieces and a group of coffins . 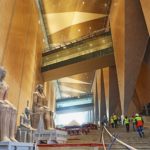 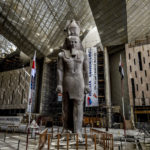 Grand Egyptian Museum Exclusive Tour – Get there before anyone else!