While Egypt is a main travel destination all year round but it the best time to travel to Egypt would be from Mid October till May. But you have to know that during Christmas and New year this is considered a peak season so it is advisable to book early. Summer months are considered very hot with a temperature reaching 35 degrees in Cairo and higher south of the country in Luxor and Aswan.

But you have to know that favorable traveling to Egypt would depend on the region you are visiting as the temprature vary from one place to another. We can divide Egypt into four regions Mediterranean coast in the North, Red Sea, Nile Valley, and Arabian Desert. Here there will be a list of the best time to travel to the main tourist destinations in Egypt

The climate in Egypt is subtropically warm and dry. Due to its location within the dry belt of North Africa, there is a desert climate in most of Egypt. Only in the Mediterranean coastal regions does the Mediterranean climate occur , so in winter, on some occasions, rainfall occurs. On the Red Sea coast, as in the interior, there is a subtropical desert climate. However, the sea breeze brings a cool breeze, which makes warm temperatures more bearable than in desert regions. There is very little or no rainfall here. Daytime temperatures are, in July, in the north of Port Said, 31 degrees Celsius; in the capital, Cairo, 34 degrees Celsius; in the tourist area, in the Red Sea, Hurghada, 36 degrees Celsius; and in Aswan, in southeastern Egypt, 41 degrees Celsius. In spring, from March to June, a warm wind of sand and dustcoming from the south, the Chamsin, crosses the country. In the winter months, from November to February, daytime temperatures rise to around 20 degrees Celsius. The nights can be cooler, lowering temperatures to about 10 degrees but, in general, they remain mild. Especially, in the coastal regions  of Egypt, the weather is mild throughout the year . On the Mediterranean coast, there may even be some rainy days in December, January and February. In desert areas, on the contrary, the probability of rain is almost zero. There is a maximum of two rainy days per year in Aswan and Luxor, east of the Nile, which leads to heat waves on some summer days, with temperatures exceeding 45 degrees.

Find out below what is the best time to travel to Egypt and spend your holidays there. Depending on what you have in mind for your trip and where you are, other months may be better for traveling to Egypt. Therefore, I give you an overview of all the relevant places for tourists and show you when it makes more sense to travel.

Climate in the Nile Valley and in the desert of Egypt

In the Nile Valley there is a semi-arid oasis climate. To the west of the Nile is the desert of Libya , which occupies about two thirds of Egypt. Here there is an arid climate. To the east of the Nile and to the Roko Sea, is the Arabian desert , with an arid climate as well. The upper Nile valley, around the cities of Aswan, Luxor and Dahkla, is very dry. In the summer months it is very hot here, with averages of more than 40 degrees. Winters are mild, so at night they can be somewhat cold. For your trip through the desert , the months of March to May and September to NovemberThey are the best time for it. The weather is not as warm as in the summer and your trip through the history of Egypt will not make you stay on the road.

The Nile not only has a current economic importance for Egypt, but above all, a story. Due to its special characteristics, being one of the first and oldest civilizations in the world, Ancient Egypt , developed on its banks. The black mud that remained after the annual buttock of the Nile, guaranteed a fruitful harvest, which is why more and more people between 3,500 BC and 3,000 BC settled there. At the same time, the women left the Sahara, which did not provide good agricultural conditions. The Nile Valley and the coastal regions had better climatic conditions to live. This is today. The Nile is the only river in the world that crosses the dry subtropical belt of North Africa. It is considered the longest river in the world and has produced the second largest desert in the world, the Sahara .

The weather on the Mediterranean coast of Egypt

What is the weather like in Egypt? Temperatures in the coastal regions, in the Nile Valley and in the desert

The weather in Egypt is warm throughout the year. During the summer, temperatures of 30 degrees prevail during the summer. Even at night, temperatures remain warm, being about 24 degrees. In the winter months, it becomes a bit colder, but going from 24 to 28 degrees, so it is still sunny and warm during the day. At night, it cools to a minimum of ten degrees between December and March. The probability of rain in Egypt is less and less throughout the year. There is a climatic difference between the different regions, which I will show you later. 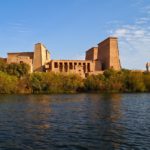 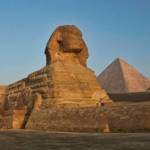