The Great Sphinx of Giza

is an imposing sculpture with a human head and a lion’s body  located next to the Pyramids of Giza . It is one of the most extraordinary and emblematic monuments not only of Egypt, but of the whole world. Sphinx is more than 70 meters in length , and is endowed with human head and body of lion, something that for the ancient Egyptians gathered in a same figure intelligence and strength. 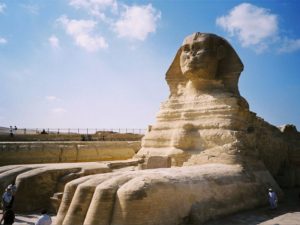 The Sphinx is one of the great mysteries of all times and for many centuries there have been numerous archaeologists’ speculations about its origin, its date of creation or its function.It is believed that it was created around the year 2,500 BC . as part of the funerary complex of Khafre in order to become the guardian to protect his grave.It has often been speculated about the disappearance of his nose , visibly worn, blaming Napoleon for its destruction in most theories. This hypothesis was dismantled when finding the drawings made by an explorer before the birth of Napoleon.

Currently the sphinx does not conserve practically any of the vivid colors that dressed her in the past , when the body and her big head were red and the Egyptian garment that covered her head (nemes) had white and blue stripes.The head of the sphinx is better preserved than its body due to the hardness of the stone in which it was made, although the body had the advantage of spending much of its history buried in the sand, something that helped to preserve it from the erosion. 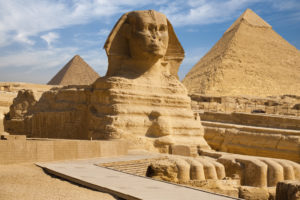 One of the key points of Egypt

The Great Sphinx of Giza is one of the most wonderful monuments of Egyptand one of the main points of interest of the country , being able to be compared in a different plane with the iconic Mona Lisa painting. The imposing and mysterious sphinx is the target of the flashes of the cameras of all visitors, who strive to take back the best of memories.