The Red pyramid  or the northern pyramid (less commonly referred to as “red”) is the largest of the three large pyramids located in the territory of the Dahshur necropolis. The name is associated with the color of stone blocks that acquire pink color in the rays of the setting sun. It is the third highest pyramid in Egypt , after Khufu and Khafre in Giza. The Pink Pyramid did not always have its current color. Previously, its walls were covered with white limestone. But at the present time, white limestone is almost completely absent, since as far back as the Middle Ages a considerable part of it was removed for the construction of houses in Cairo, as a result of which pinkish limestone was exposed.

This pyramid is attributed to Snofru, as his name was found, inscribed in red paint on several plating blocks. The internal premises have retained traces of ancient organized archaeological work, as well as minor cosmetic repairs. The temple of unfired bricks was built on the east side, obviously much later than the time of the construction of the pyramid itself and according to completely different (primitive technologies). The “pyramidion” installed here is assembled from separate fragments of cladding and modern concrete, clearly for tourists and has never been at the top of the pyramid (since it was not even ever a single whole).

The northern pyramid of Pharaoh Snofru in Dahshur, at the time of its construction in  2640 ~ 2620gg. er was the highest construction in the region. It is also considered a very successful attempt to build a “real” isosceles pyramid (it has the correct stereometric pyramid shape), although the angle of its sides has an error of only 43 ° 22 ‘compared to the late norm of 51 ° 52’. She also has an extremely low slope of the walls (base 218.5 × 221.5 m at a height of 104.4 m). 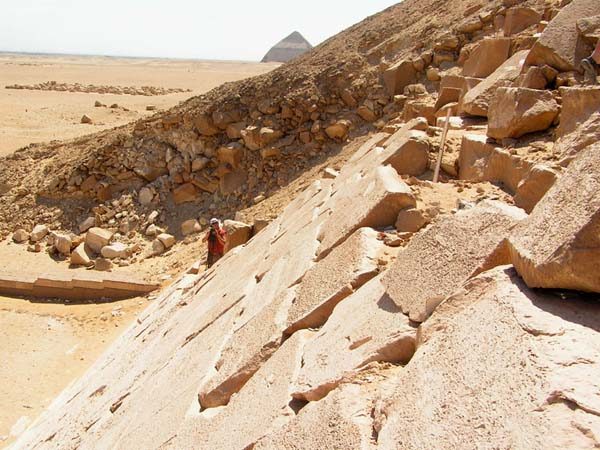 The volume of the limestone pyramid is 1 694 000 m³. The size of the base is 220 m. Its initial height was supposedly 109.5 m, now its height is 104 m.
Within the radius of 2 km there are other pyramids and ancient structures.
The entrance through the inclined passage on the north side leads down into three adjacent chambers, about 17 meters high, which are accessible to the public. The pyramid should be visited with caution due to the strong odor caused by the concentration of ammonia in its premises.