The original name of the city sounds like “Inebu-hedge”, which translates as “White walls”. According to the ancient Greek historian Herodotus, the city was built on the orders of King Ming, who ordered to build a dam, which would change the direction of the flow of the river that flowed nearby, and in place of the old riverbed he ordered to build a city.

For several millennia, Memphis was the cultural, administrative, and commercial center of the country, into which thousands of pilgrims and merchants flowed from all parts of Africa and Asia. But after the construction of Alexandria, the role of Memphis weakened, and the city gradually fell into decay and collapsed. Nowadays we will no longer see its beautiful buildings – they are all completely covered with silt. Almost no preserved entire buildings. Now ancient Memphis has become an open-air museum.

About the Place of the Ruins of Memphis

South-west of Cairo is one of the most significant sights to date – the ruins of the once-majestic capital of ancient Egypt, the city of Memphis. Today, the ruins of Memphis are of interest only to archaeologists and tourists, and in ancient times the city was the cultural, economic and administrative center of the country.
Admire the ruins of Memphis at any time, as it is a kind of open-air museum. The easiest way to get here is from Cairo. A stop at the ruins is also provided during the excursion to Saqqara.

What to see in Memphis

Archaeologists claim that today only 5% of the ruins of Memphis are well researched. And the excavation is very difficult because of the proximity of groundwater and a large layer of sediment. But what has already been excavated deserves the attention of curious tourists. The most famous landmark of the ruins of Memphis in Cairo is the statue of Pharaoh Ramses II (1279–1213 BC.). Its height reaches 10.3 meters. The statue is beautifully preserved, and today it can be seen in the pavilion, built right among the ruins. 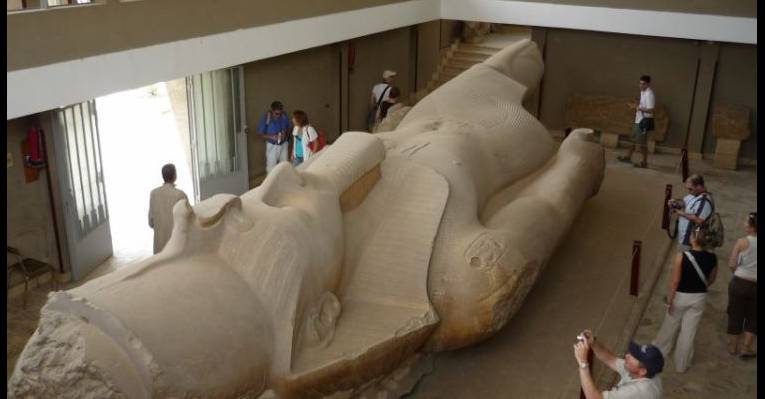 ut not only the statue of Ramses attracts tourists to visit the ruins in Cairo. Here is the alabaster sphinx with a length of 4 meters, whose height reaches 8 meters. Scientists refer this statue to the times of Amenhotep III (1390–1352 BC).
Unfortunately, in the ruins of Memphis has not survived entire buildings. But those who wish can see all that remains of the Ptah temple complex, the sanctuary of Amon, parts of the extensions to the palaces of Ramses II and Seti I. Several more buildings have been excavated, the purpose of which has not yet been determined.

The history of the ancient capital of Egypt The

modern ruins of Memphis in Cairo, many centuries ago, was a magnificent city located on the border of Lower and Upper Egypt. Min (Menes) was the first king to rule in this city. According to Herodotus, it was this ruler who ordered the construction of a magnificent city here, which everyone knows today as the ruins of Memphis.
In ancient times, the city was called the “White Walls” (Inebu Hedge). Memphis was also called “House of the Soul of Ptah”, “Scales of both lands”, “Wand of both lands”, etc.

This city was the capital of the country until the end of the Old Kingdom and the permanent center of worship of the god Ptah. Today, part of its temple complex Hut-ka-Ptah can be viewed by visiting the ruins in Cairo. Also here was the necropolis of Apis (sacred bulls), which were considered the earthly incarnation of Pta.
Residents left the city before the founding of the modern capital, Cairo. Its walls were demolished by residents of nearby settlements for building materials for their houses. And over time, Neil changed the course and finally buried the traces of the ruins in Cairo.