One must visit place in Egypt is Abu Simbel. If you are planning trips to Egypt, in February or October visit the Abu Simbel Sun Festival.

Abu Simbel is one of the most popular tourist attractions in Egypt. The Temple of the Sun in simple Abu is built by King Rameses II 1250 BC Among the Temple of the Sun, there are two other temples built for the king himself and his wife Queen Nefertiti.

During the Abu Simbel Sun Festival, in February and October, the temple will light up from the inside. The sun lights the entrance corridor of the temple and three of the four statues at the end of the corridor. Only the statue of Phat (the God of darkness) will remain dark.

After seeing the light in the temple, people gather around to celebrate. There will be food, dance and other holidays.

Rameses II designed his temple to ease each year at the same time. Each year will take place on February 22 and October 22.

the original dates were February 21 (RAMSES II The date of the ascension throne and October 21 (his birthday). Given that the temple was moved by the Egyptian authorities in 1964 the data transmitted for one day.

The sun perpendicular to the face of King Ramses II, in a phenomenon repeated twice during the year on October 22 and February 22, in a phenomenon seen by thousands of tourists and Egyptians, and the orthogonal starts after sunrise and continues for 20 minutes, and the strange thing about this phenomenon is that it only occurs on the day of Ramses II’s birth, And the day she crowns her as king over Egypt.

The ancient Egyptians are said to have designed the Bossemble plant, building the movement of the astronomy, so that the sun passes its path through a narrowly calculated point, so that if the sun’s rays entered on February 22 and October 22, and fell on the face of the statue, then the next day, it deviates a small deviation of a quarter of a degree, And thus you fall on the wall of the opening and do not fall on the face of the statue.

It is worth noting that he was celebrating this phenomenon before 1964 AD, on October 21 and February 21 of each year, before moving the Abu Simbel campus to its current location, which is 200 meters from its original location, to protect it from drowning due to the construction of the High Dam. The relocation of the temple caused the phenomenon to be delayed by one day, to be on February 22 and October 22 each year. 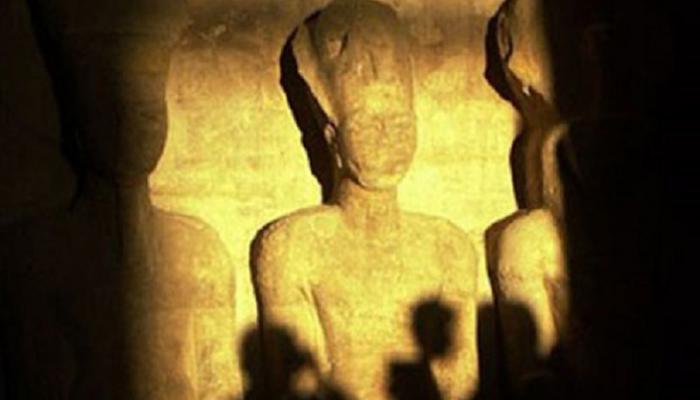