What is the most famous food in Egypt?

For centuries and centuries, Egypt has fascinated the world with its culture, history and heritage. Egyptian cuisine is quite similar to the cuisine of other countries in the eastern Mediterranean. Foods such as stuffed vegetables, vine leaves, Shawarma, Tajine and Falafel can be found everywhere in this part of the world.

If you want to taste the local gastronomy, the mezze is a ritual not to be missed. It consists of installing a variety of dishes on a table so that it can be used at will.

A typical and very popular dish in Egypt is the famous Koshari, a mix of macaroni, lentils, rice, chickpeas and tomato sauce. Very popular among locals and very cheap, to try!

But did you know that the country also offers tasty and generous cuisine? Here are 10 traditional Egyptian dishes to know to familiarize yourself with the local gastronomy.

Many Egyptian dishes are common to the whole of North Africa such as hummus , the tabouleh , the babaganoush or tahini . But others, less known, are also worth to be tasted. 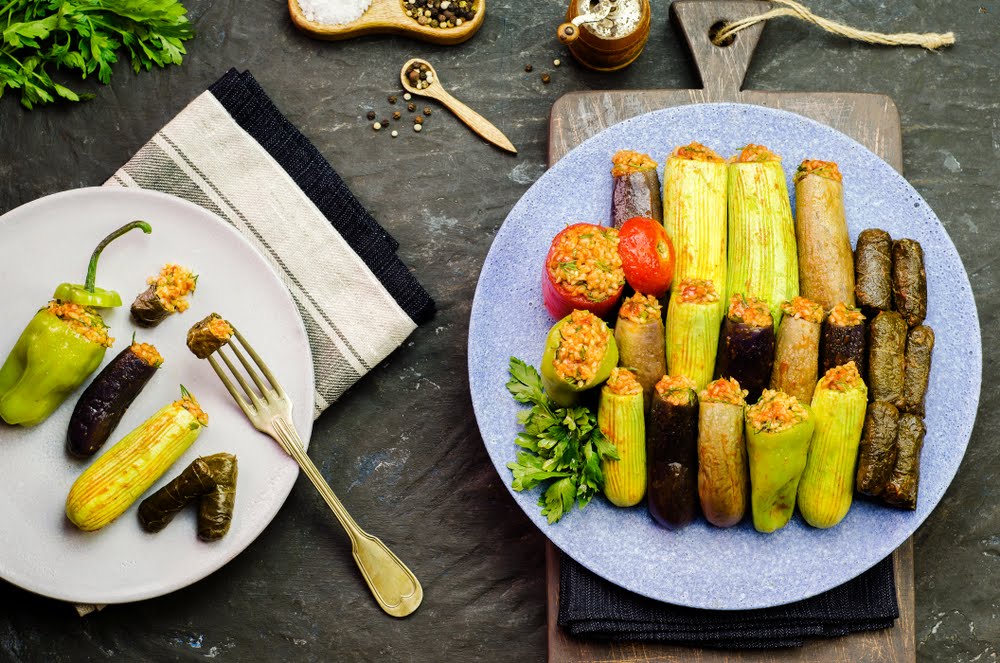 One of the best-known Egyptian dishes is dolma (pictured above), stuffed vine leaves similar to those found in Greece.

The foul moudammas is the national dish, that the Egyptians like to eat at breakfast. It is dry and boiled beans, served hot with oil and lemon, which is traditionally eaten with bread. The national dish in the kitchen of many Arab countries, including Egypt, traditionally applied to the table for breakfast. It is cooked over low heat beans, which can be flavored with garlic, lemon juice and olive oil. Due to the low cost and nutritional ingredients, ful since ancient times is an important part of the diet of ordinary people. 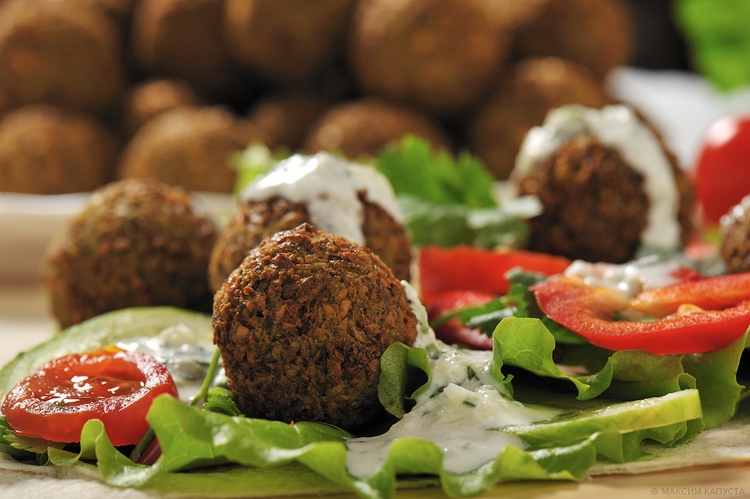 A falafel – it’s the same Ful, but in the form of pearls, fried in oil. By the way, one of the most popular among the Egyptians themselves sandwiches can be accurately identified “Falafel”, wrapped in pita bread, with a salad of fresh tomatoes and cucumbers. In Egypt, in every corner there are coffees, serving these two dishes.

he fried fava beans and vegetables, with plenty of cumin and black pepper. Also served in sandwich form. 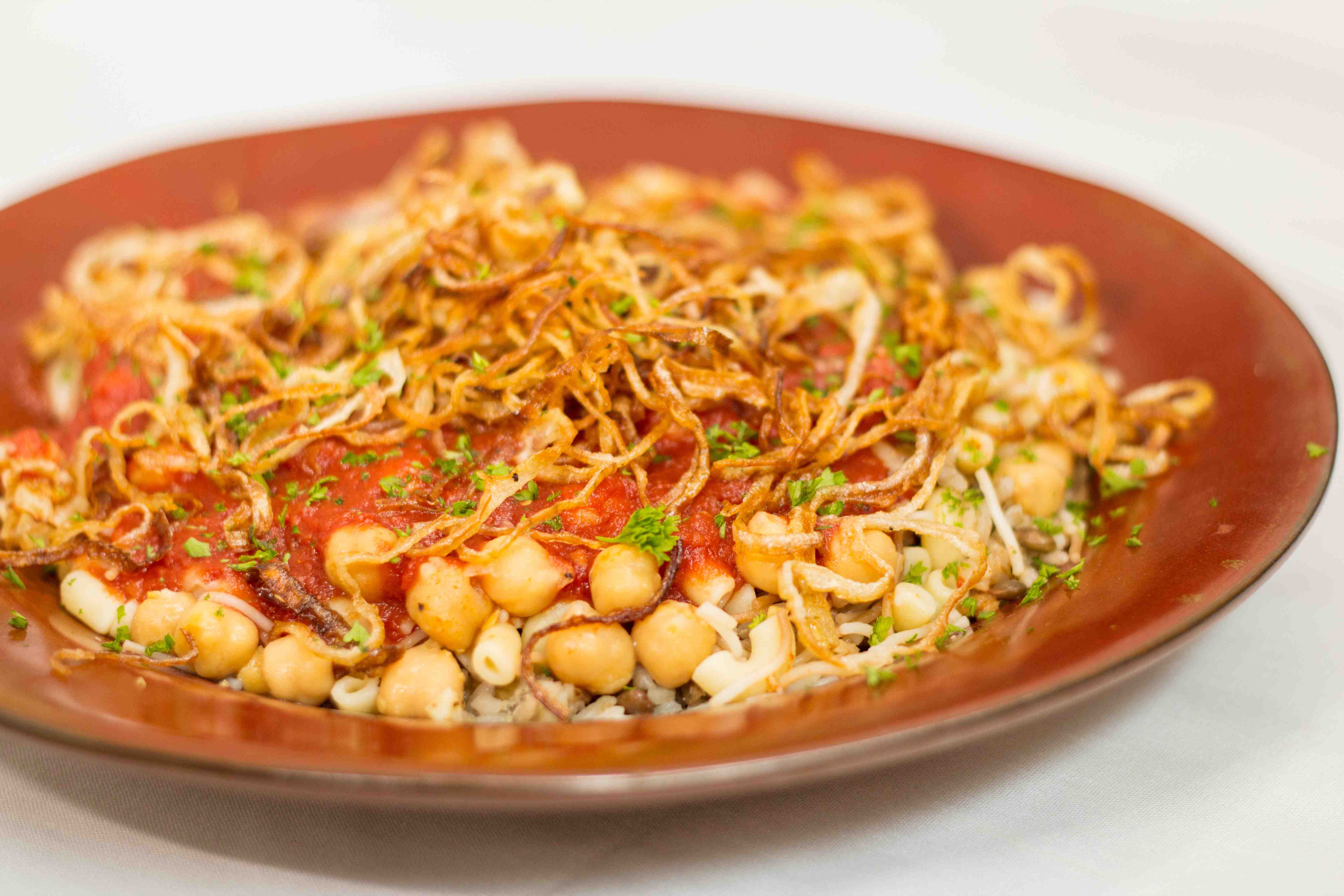 Koshary is considered an Egyptian vegetarian dish consisting of pasta with tomato sauce, which is mixed with rice, lentils, caramelized onions, garlic and chickpeas. Because, in this dish 4 a source of carbohydrates, It has become very popular food dishes, and can be purchased directly on the streets of Egypt for the past 100 years. Interestingly, Kosharite that has no Egyptian origin, Some of its ingredients are brought here by British army soldiers in the 19th century. Pasta imported from Italy, Tomatoes – from Latin America, and rice – from Asia. However, it occurred to him that the Egyptians mixed, to get a very satisfying, delicious vegetarian dish. 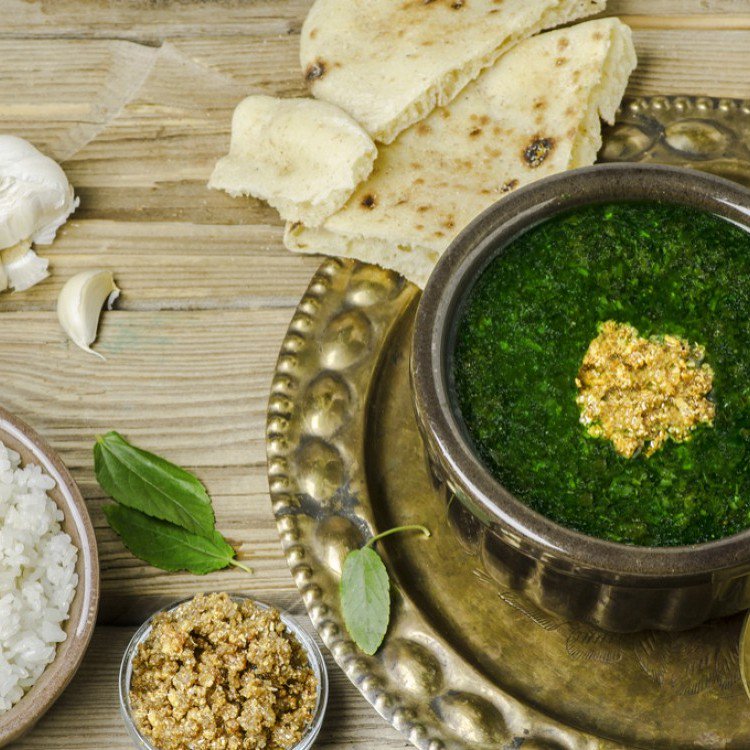 Mouloukhia is a seasonal crop. It is an Egyptian dish but made all over the levant in many ways. It is soup like consistency made with chicken or meat broth. Served with both bread or rice.

It is a soup prepared from the crushed jute leaf, cooked in the broth of some meat. A thick and slightly sticky green broth is always served accompanied by rice and the meat of the preparation, more traditionally chicken. 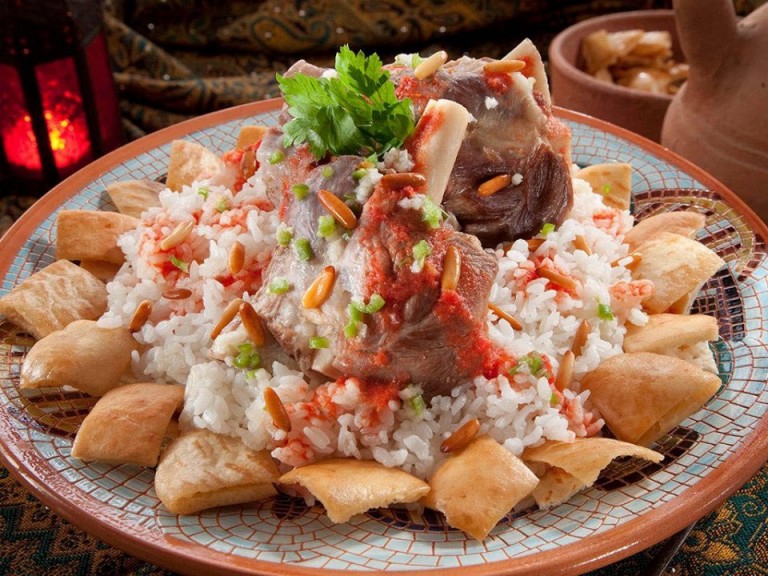 Fattah is preparing for the holidays, as a Christian, and a Muslim. The Egyptians adopted this dish in the Nubians. Fattah is made up of layers of toast and boiled rice. All pour the sauce over the meat broth with garlic and vinegar. In the end they lay on the top of the juicy cuts of meat and fried egg. Fattah – a very high calorie meal, so don’t eat often. 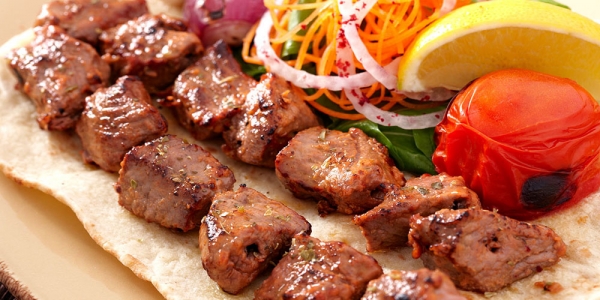 Today it is already one of the best known meals worldwide , but that does not mean that it is still one of the most traditional in Egypt. If we talk about Egyptian cuisine we can not ignore the  Kebab .

This delicious dish consists of one skewers of charcoal roasted lamb meat that is seasoned with a lot of parsley. A more famous variant is Kebab Hal-la, a dish in which the pieces of sliced ​​meat have previously been seasoned with various spices. 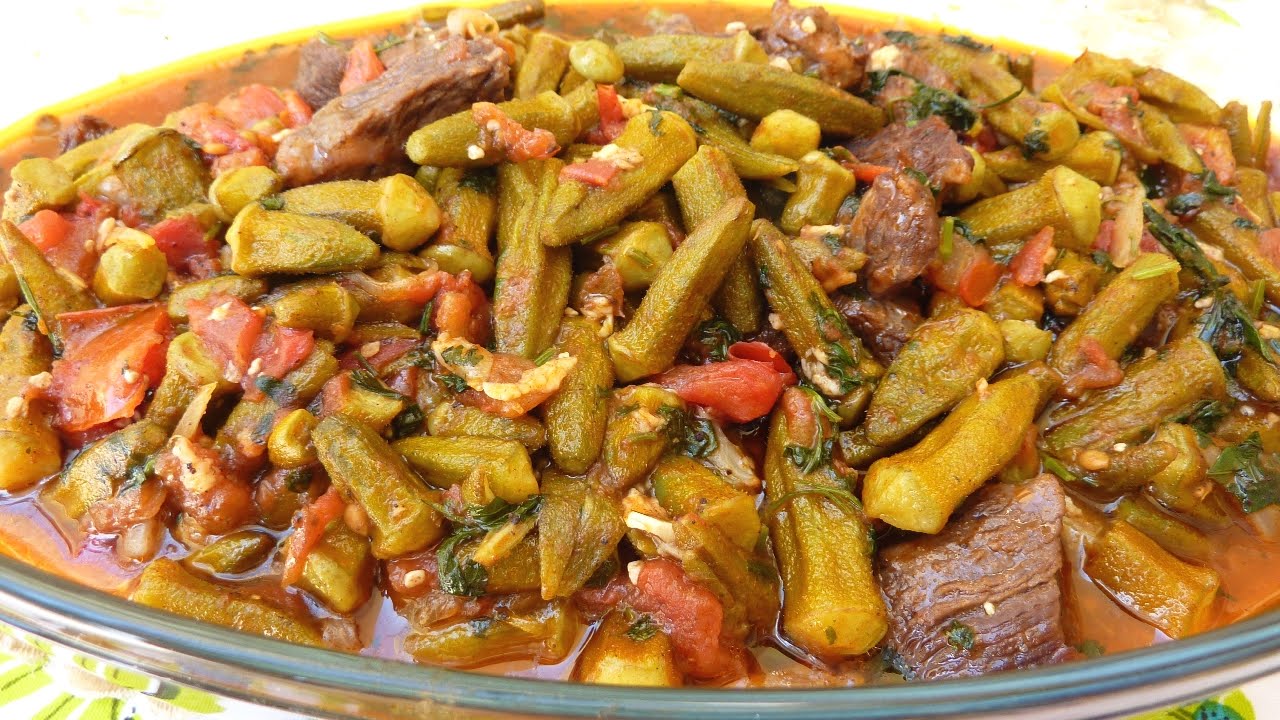 These are Greek horns cooked in tomato sauce that can be found everywhere in Egypt. Simply delicious in the typical dishes of Egypt is the Bamia. A plate of Ocra, plant of Egyptian origin, cooked with tomato sauce (usual sauce in Egyptian cuisine) very thick. 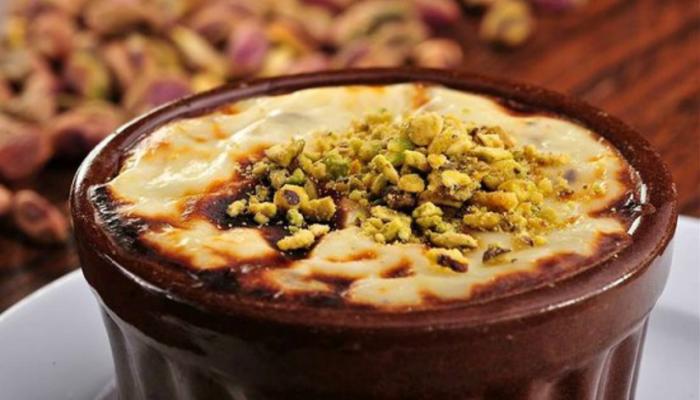 is one of the most consumed sweets in Egypt. It consists of a mixture of bread or pasta with milk, nuts, coconut and raisins. This is served hot. 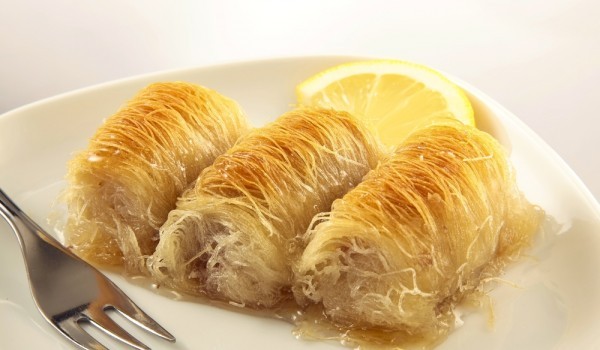 Kunafa (or kanafeh, Konafa) – Egyptian sweetness, made from very fine Kataify pasta dough. The origin of this dish is a mystery, it can be seen in medieval cookbooks Egypt, Lebanon and Turkey, However, the origin of this candy is not clear. Kunafu made of very thin noodles. The batter is applied with a thin layer on a hot pan, until zazolotitsya becomes crispy. Then, it is mixed with butter, butter or vegetable, and wrapped in a filling of nuts, whipped cream, cream. Then he went to the oven, then served with fruit syrup.

t is another dessert that we advise you to try in Egypt. Kanefeh is a cake that is prepared with some semolina noodles , similar to angel hair, which are rolled and crushed and cooked together with butter and a creamy cheese over low heat. Once ready, it is soaked in syrup and a few ground nuts are added.

A hungry tourist in Cairo can try the main dishes of Middle Eastern cuisine: jacket, kebab and falafel – are quite popular in Egypt. Falafel in Egyptian called taameya consists of fava beans instead of peas. In truth, the Egyptian dish is koshari . This carbohydrate bomb is made from pasta, rice, vermicelli and chickpeas, all covered with crispy fried lentils and onion chips. Restorn Koshari Abu Tarek in the center of Cairo is a favorite place for most tourists, and a portion of koshari costs about 50 cents. If you want to have a snack, not looking up from the contemplation of the landscapes of the pyramids, drop by Abou Shakra.